Back to home page click here
WELCOME TO SARAJEVO

Translation of opening lyrics from "Da sam ptica",
a sevdah song sung by Amira on the CD "Rosa"

Roger and his wife Vee regularly enjoy interesting holidays, as will be evident from this web site, but recently Roger's sister Silvia (who lives in Leicester) suggested that it would be fun if the two of them went away for a break together. So, in Autumn 2006, Roger and Silvia went to Paris for a long weekend. They enjoyed the occasion so much that they decided to repeat the experience in September 2007 and go rather further afield.

We chose to spend a weekend in Sarajevo through a break offered by Regent Holidays [click here]. For Silvia, this was her first trip to Eastern Europe while, for Roger, Bosnia was his 47th country visited. Roger got in the mood by buying a CD of Bosnian music called sevdah [click here]: "Rosa" by Amira [click here].

Sarajevo is the capital city of the country of Bosnia and Herzegovina (abbreviated locally as BiH). Like several other countries, this was created out of the horrors of the Yugoslav wars of the early 1990s. The territory declared its independence in March 1992. Serbia responded to the declaration by armed resistance and an attempt to partition the republic along ethnic grounds. The war started on 5 April 1992 and ran until 29 February 1996.

The most recent research places the number of victims at around 100,000–110,000 killed (civilians and soldiers) and the number displaced at 1.8 million. This research has shown that most of the dead (civilians and soldiers) were Bosniaks (65%) with Serbs in second (25%) and Croats (8%) in third place. Of the actual documented casualties, 83% of the civilian victims were Bosniaks, 10% were Serbs and some 5% were Croats,

Following more than three years of inter-ethnic strife, in November 1995 a peace agreement was reached in Dayton, Ohio, USA. The Dayton Peace Accords have created a second tier of government, composed of two entities of roughly equal size: the Bosnian/Croat Federation of Bosnia and Herzegovina and the Bosnian Serb-led Republika Srpska. European Union peacekeeping troops remain in the country. 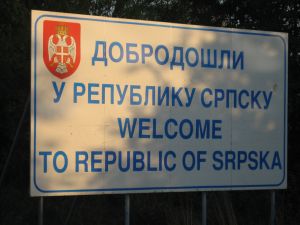 On the outskirts of Sarajevo, we drive into
Serb-run teritory in this fractured nation

There has been a great deal of reconstruction and investment is slowly coming in from abroad, but there is still unemployment of around one-third and the divisions are greater than ever: this small country with half the population of London has no less than three presidents (Bosniak, Croat and Serb); there is much, much less integration of communities than before the war; children are being taught three different histories in their respective schools; and there are even three different mobile systems used by the three ethnic communities. As one very knowledgeable observer of the political scene put it to us on our visit: "The bottom line is that the situation is a mess - and it's getting worse".

Sarajevo lies in a wide valley running east-west created by the Miljacka River. It was founded as a city in 1461 under Isa-Bey Isakovic, the first Ottoman governor of the province of Bosnia.

For most people, Sarajevo has two claims to historical prominence.

First, it was the location of the assassination of the Archduke Franz Ferdinand on 28 June 1914. After several bungled attempts earlier in the day, this took place near the Latin Bridge when the young Serbian nationalist Gavrilo Princip shot the Archduke and his pregnant wife Sofia, an incident that triggered the First World War. Although that war resulted in more than 9 million deaths, Sarajevo itself largely escaped damage and destruction during the conflict.

Second, it was the site of the longest siege in the history of modern warfare, lasting from 5 April 1992 to 29 February 1996 – a total of 1,335 days. This siege was carried out by the Yugoslav People's Army (JNA) and Bosnian Serb forces (VRS). It is estimated that more than 12,000 people were killed (including 1,500 children) and 50,000 wounded during the siege, 85% of them civilians. There is a well-known 1997 film on the siege called “Welcome To Sarajevo” [for my review click here]. 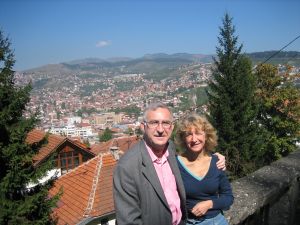 Before the war, Sarajevo's Muslim population was around 45%. The city today is a peaceful place of 300,000 but with a majority Muslim population of around 85% and smaller Orthodox and Catholic communities. It has a distinctive lifestyle, caught by the words 'sabur' ('take it slow') and 'bujrum' (''you are most welcome'). The cafe culture and coffee define the nature of the place.

Thursday morning and the trip was almost over before it had even began due to a security alert at East Croydon railway station. This made Silvia - travelling down to Gatwick from Leicester - later than intended and made Roger - intending to take a train to Gatwick from Victoria station - very much later than planned. If we had missed the flight, it would not have been a case of taking another one a few hours later, since our airline British Airways only make three direct flights a week from Gatwick to Sarajevo. Fortunately we made it and everything else on the trip went perfectly, starting with the 2 hour 10 minute flight to Sarajevo on a Boeing 737-436. Shortly after we landed, we heard what sounded like some sort of explosion, but it proved to be simply a signal that it was sunset and Muslims observing Ramadan could end their fast.

Now the airport is only 12 km (7.5 miles) from the city centre, but there are no shuttle buses and no bus routes in the near vicinity, so we had arranged a transfer to our accommodation. Our choice of hotel proved to be a sheer delight: Hotel Ada [click here] - named after the owner Adam Skender - is a small place with only seven rooms and one apartment. But it is a little jewel since it was once the Swedish consulate, it is perfectly located a few minutes from the historic Bašcaršija district, and above all the service is so welcoming and friendly (we made friends with the young women Leila Husovic and Dina Ahmetspahic).

Now, three years ago, Roger made a trip to Milan to speak at a training centre run by the International Labour Organisation and one evening he ran into a group of students on another course, chatted to them for a while, and exchanged e-mail addresses with a few, including Vesna Kraišnik from the University of Sarajevo. So, once this trip was planned, he made contact with Vesna (aged 31) and arranged to meet for dinner on the first night. She was accompanied by an academic colleague Sini&#353a Berjan (28) who spoke even better English.

We had asked them to take us at our expense to a restaurant that served typical Bosnian food and they made an excellent choice. The Kibe Restaurant is located up in the hills to the north of the city and provides a spectacular view of the thousand sparkling lights in the valley below. On the evening we ate there, one room was taken over by the European Union High Representative for Bosnia and Herzegovina, the Slovak Miroslav Lajčák [click here] and his entourage.