"The more you knew of South America,
the more you would understand that
anything was possible - anything".

Following our visits to Egypt (1999) and China (2000), Roger & Vee chose South America for the third consecutive trip outside our usual vistas of Europe and North America - each trip longer and more adventurous than the last. This time we took three weeks to see something of five countries: Brazil, Argentina, Paraguay, Bolivia and Peru. It was our first visit to the southern hemisphere and took the number of countries visited by Roger to 31.

We prepared ourselves intellectually by looking at travel books and articles and reading about the history of the conquistadors [for review click here] and prepared ourselves physically by having all the usual injections plus Yellow Fever. We had to pack carefully because we stayed in hotels in 10 locations and encountered an extreme range of temperatures.

We travelled with the company Journey Latin America [click here] and the JLA name for the tour was Hummingbird [click here]. The booking information warned that "there may be moments of discomfort" and "delays (manana) are a way of life" - so it proved to be!

Our Tour Leader was 5 ft 4 in Jill Harvie from Edinburgh who was a few weeks short of her twenty-seventh birthday. She was enormously efficient and professional and managed to cope with each new problem that we encountered. Also she proved to be an incredibly warm and open person and we had terrific fun together.

In contrast to our China trip where the group numbered 22, the Hummingbird tour only had six clients, so we had to get along well together and we did. Besides, Roger and Vee, there was another middle-aged couple, Tony and Wendy Mitchell from the north of England. Tony is a doctor who has just returned to general practice and Wendy is now retired having run two kitchenware businesses. The other two tour members were women in their 30s who had never met before they shared rooms for the trip. Rebecca (Becs) Brindley works as a buyer at Tesco and 5 ft 11 in Helen Guest is a training consultant.

In the course of the three weeks, we used a wide variety of forms of transport, ranging from a bi-motor dinghy to a reed boat, and had some very challenging - that's one word for it! - journeys. The outward flight from Madrid to Rio was nine and a half hours and the return flight from Lima to Madrid was 11 and a half hours; our longest train journey (Puno to Sucre) turned out to be 12 hours; but the worst journey (Sucre to La Paz) was one of 13 and half hours in a coach with no lighting, no heating and no toilet through the highest city in the world (Potosi) in the middle of the night when we all froze almost to death (more about this later).

The highest point on our travels - La Raya in Peru - was 14,400 feet (4,313 metres) - that's more than three times the height of Ben Nevis which is the highest mountain in the UK. At times, we encountered some really freakish weather and, while we were in Peru, the country suffered a serious earthquake. 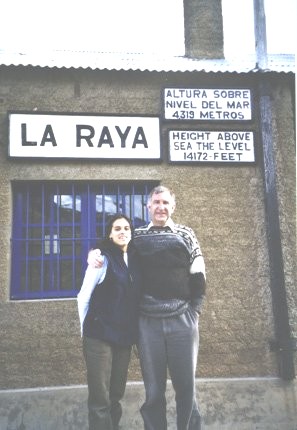 At the highest point of our journey, Roger makes friends
with American student and fellow train traveller Tara Comly

In the circumstances, we fared very well physically. All of us suffered some diarrhoea and symptoms of altitude sickness, but that is inevitable on a journey of this kind. Vee had the worst experience when she had to spend two days in bed in La Paz because of bad altitude sickness. In spite of all the scare stories, none of us was mugged and none of us lost anything but, of course, we were very careful.

Our trip took us from coast to coast, from the Atlantic Ocean to the Pacific Ocean, so we started at Brazil. When the Portuguese and the Spanish were arguing over the territory of South America, the Pope divided the New World into two zones of influence at the Treaty of Tordesillas in 1494. What we now call Brazil went to Portugal which is why the official language is still Portuguese.

Whereas the Spanish zone fragmented into many different nation states, the Portuguese zone remained a unitary whole and Brazil today comprises some 48% of the land mass of South America which is an area as large as the USA (without Alaska). The name comes from braza, the Portuguese for red hot wood. The country won its independence in 1822 and today its citizenry of 154 million is a real mix of individuals tracing their ancestry from indigenous natives, black slaves and European settlers.

At 4.30 pm on a grey and wet Saturday afternoon, Roger and Vee took a cab to London's Heathrow Airport where we took an Airbus A320 on a two-hour flight to Madrid, followed two and a half hours later, by a nine and a half hour flight in a Boeing 767 from Madrid to Rio de Janeiro. Both flights were with Iberia [click here].

We were met at Rio's airport by our JLA Tour Leader Jill Harvie and our local guide Maria Luiza Sfair and transported into the centre of the city. Unfortunately we were too early to access our hotel rooms, so we walked round to the "Eclipse" bar on Avendida N.S. Copacabana for a breakfast of toast and coffee. It was 9.15 am when we were able to enter our room - after a door-to door journey of over 20 hours.

Our hotel was the Luxor Regente, located on the street - the Avendida Atlantica - running alongside the world-famous Copacabana beach [click here]. Vee had found the flight to Rio exhausting and was really out of it for the morning, but Roger could not wait to go people-watching, so he took an hour's walk along Copacabana beach to Ipanema beach. June is the depths of winter in South America, but the temperature was still 26C/79F.

It was an incredible scene - like something out of a television holiday programme. Since it was Sunday, the road nearest to the beach on the dual carriageway was closed to traffic and Rio's citizens - known as cariocas - were strolling, power walking, jogging, roller-blading and cycling. The beaches themselves were awash with sunbathers and swimmers. There were people of every age, colour, size and shape, most of them wearing virtually nothing, with tons of cleavage and some amazing breasts, buttocks and stomachs.

At 12.45 pm in the hotel reception area, we met the other members of the tour group and had a briefing from our Tour Leader Jill. Then, at 2 pm, we commenced a three and a half tour of Rio with our local guide Maria Luiza.