Back to home page click here
CAIRO AND CAMELS

"Avoid Egypt, and though your brains be of vast capacity, though your eyes be never raised from your books, you will yet remain in so many ways an ignoramus".

While most of the world prepares to commemorate the arrival of the second millennium, Egyptians can already look back on five millennia of civilisation. This is one of many reasons why Roger and Vee – Vee even more so than Roger – have wanted for a long time to visit Egypt.

We almost made it in 1993 when Roger was due to attend a World Congress in Cairo and Vee was determined to accompany him. But, with just four weeks to go, the organisers were forced to relocate the Congress because of growing protests from delegates worried about the terrorist threat. The subsequent massacre of 58 tourists in Luxor in November 1997 damaged Egypt’s tourist industry, but it has now bounced back.

In truth, there are still casualties in the 18 year long campaign by the outlawed Muslim Brotherhood, but the Western press is only interested if it is tourists who are killed or injured. Just three weeks before our visit, four militants were gunned down by the security forces in a district of Giza. However, armed soldiers everywhere make tourists feel perfectly safe. 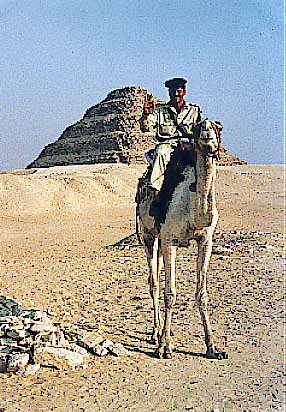 The ubiqitous military - here at Sakkara

We booked our holiday with Kuoni [click here] which is certainly not the cheapest travel company but provides a high level of service. Our four and a half hour flights were with EgyptAir: the aircraft, Airbus A340, were fine, but punctuality was poor, the food was indifferent, and there was no alcohol. On arrival, it took us an hour to clear customs at Cairo airport and the previous day, when the computers went down, it was taking twice as long. The facilities at the airport are minimal, barely up to the standard of an Eastern European country before the revolutions.

We were met at the airport by our assigned Kuoni representative, the ever-helpful Sherif, and driven by coach to our accommodation. We chose to stay at the Cairo Sheraton Hotel because it is located in the city centre, but all the other hotels in the Kuoni brochure are situated near the pyramids. The Sheraton was one of the first five-star hotels to be built in Cairo and opened in 1970. It is a massive affair with a total of 670 rooms located in two tall towers (we were in the Cleopatra Tower). The facilities were comprehensive, but the service in the restaurants was often sluggish and sullen. 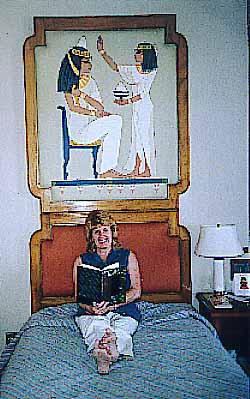 Vee in our room at the
Cairo Sheraton Hotel, studying hieroglyphics
- a skill with which she already had some
proficiency after years of reading Roger's writing

On our first day in Egypt, we took a city tour of Cairo with a charming and knowledgeable female Kuoni guide called Hanaa.

First stop was the famed Cairo Museum [click here] - located in the huge Tahrir Square - which was completed in 1902. We were told that the museum houses some 100,000 items and advised that, if one spent a minute observing each one, then it would take nine months to view the whole collection. We had only two and a half hours there and so inevitably we concentrated on the Tutankamun collection on the first floor, unearthed by the British archaeologist Howard Carter in 1922. In fact, Roger had seen some of these wonderful artefacts in 1972 when there was a special exhibition at the British Museum to mark the 50th anniversary of the discovery.

Of course, Tutankamun was a minor and young king who only had a short reign (1361-1352 BC), but his tomb was the only one never ransacked by robbers and the legacy to us today is simply breathtaking. Two air-conditioned rooms – the rest of the museum is not so comfortable – contain the most magnificent objects including the golden funeral mask and fabulous jewellery. 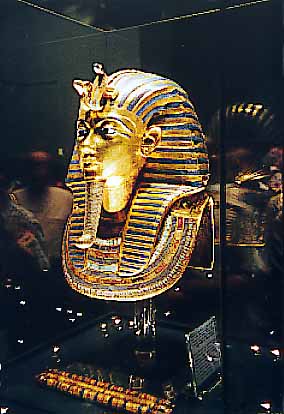 The sensational funeral mask
of the young pharoah Tutankamun

The whole key to our modern-day understanding of the Ancient Egyptian civilisations is the prosaically-named Rosetta stone, a slab of black granite discovered in 1789. This contains the same text in three languages – hieroglyphic, demotic and Greek - which eventually enabled the Frenchman Jean-Francois Champollion to translate hieroglyphs in 1822. A copy of the Rosetta stone is to be found opposite the ground floor entrance to the museum, but ironically the original is in the British Museum.