Back to home page click here
HOW TO USE PUNCTUATION 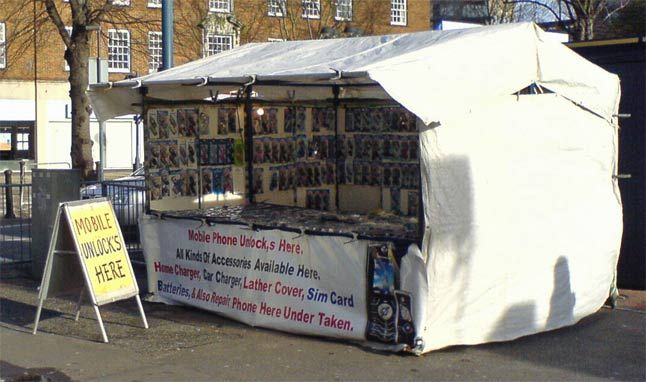 In Woking market, there's an unnecessary apostrophe on the yellow sign, and then
an unnecessary comma (masquerading as an apostrophe!) on the white cloth at the front of the stall.

The earliest known punctuation was credited to Aristophanes of Byzantium, a librarian at Alexandria, around 200 BC [for brief biography click here]. However, punctuation as we understand it today was the result of the rise of printing in the 14th and 15th centuries and was developed by Aldus Manutius [for brief biography click here] and his grandson (who had the same name).

There is only one reason to use punctuation correctly - but it is a vitally important reason: to make oneself understood with clarity. In speech, we have a variety of devices for clarifying our meaning: stress, intonation, rhythm, pauses, hand or body movements. In text, we have only the words and the punctuation and poor punctuation enables the same words to have different or unclear meanings. There are clear rules for the use of punctuation marks and they are not difficult to learn and to apply. Start here ...

How to use the full stop

There are only two uses of the full stop (or, as the Americans call it, the period):

Note: A common mistake is to use a comma where a full stop should be used, as in the linking of statements or sentences.

How to use the question mark

There are only two uses of the question mark:

Note: A question mark should not be used at the end of an indirect question in which the speaker's exact words are not repeated.

How to use the exclamation mark

There is only one use of the exclamation mark:

Note: Exclamation marks should be used sparingly and usually not at all in formal writing.

How to use the comma

The comma is used very frequently and used incorrectly almost as frequently. There are, in fact, four distinct uses of the comma:

Note 2: The main purpose of punctuation is to aid understanding; a subsidiary purpose is to aid flow. Use joining commas and pairing commas where this aids understanding and/or flow. As a general rule, the longer the sentence or the more complex the sentence, the greater the need for commas.

Note 3: When in doubt over where to use a comma, try reading the sentence out loud and, generally speaking, commas should be used where you pause for clarification or breath.

Note 4: There is some controversy over use of something called the serial or Oxford comma which is the last comma in this example: The colours in the Union Jack flag are red, white, and blue. Generally the serial comma is not used in Britain where it is regarded as unnecessary, but it is commonly used in the United States where it is thought helpful. My preference is to use a listing comma before 'and' or 'or' only when it is necessary to make the meaning clear.

How to use the colon

The colon has two uses:

How to use the semicolon

Note: In these uses, the semicolon is stronger than a comma but less final than a full stop.

There is a minor use of the semicolon:

How to use the apostrophe

The apostrophe is the most misused punctuation mark in the English language by far, but this should not be the case since there are only two major uses of the apostrophe:

Note 1: The first use of the apostrophe should usually be avoided in formal writing.

Note 3: There are three very, very common misuses of the apostrophe.

How to use the hyphen

There are two main uses of the hyphen:

A minor use of the hyphen is:

How to use the dash

The dash has only one major use:

Note: Only one dash is used if the strong interruption comes at the beginning or the end of the sentence. [We earnestly desire peace for all nations of the world - and we will work hard for it.]

There are several minor uses of the dash:

How to use quotation marks

There is only one use of quotation marks (or quotes, speech marks, or inverted commas, as they are often called):

Note 1: Strictly speaking, the only punctuation marks that should go inside the quotation marks are those that are part of the quotation itself. [He screamed out "Help me!" and so I went to his aid.]

Note 2: International practice varies on whether quotation marks should be double or single (I use double) but, when one has a quotation within a quotation, one uses the other type of quotation marks (in my case, single) [He told me: "Your use of the phrase 'in this day and age' is hackneyed".]

Note 3: There is a version of quotation marks known informally as scare quotes and these are used when the writer wishes to signify that the quoted word or words are odd or inappropriate or the writer wishes to express irony or even sarcasm. [Daniel was assured that he would be 'safe' in the lion's den.]

Note 4: One final use of quotation marks is when one is talking about a word or phrase when one normally uses single quotation marks. [Someone I know overuses the word 'actually'.]

How to use brackets

Note: Round brackets are normally used instead of dashes or bracketed commas where the interruption is something of an aside from, or a supplement to, the main sentence.

There is a minor use of brackets:

How to use square brackets

There are two uses of square brackets (which, confusingly, Americans call simply brackets):

How to use the ellipsis

The ellipsis (...), sometimes called the suspension or omission marks, has three uses:

Note: Technically there should be three dots in an ellipsis, but I would accept two at the beginning of a piece and four at the end.

"We have a language that is full of ambiguities; we have a way of expressing ourselves that is often complex and allusive, poetic and modulated; all our thoughts can be rendered with absolute clarity if we bother to put the right dots and squiggles between the words in the right places. Proper punctuation is both the sign and the cause of clear thinking. If it goes, the degree of intellectual improverishment we face is unimaginable".

I agree - and offer this short guide as a modest contribution to the correct use of punctuation.

If you have comments on this advice e-mail me